“Doctor Strange in the Multiverse of Madness is absolutely nuts. Absolutely mad you might say. Hardcore fans are going to bug. Casual fans are gonna go WTF am I watching? But don’t know if anyone will deny it’s Sam Raimi to the max, and Elizabeth Olsen owns it from start to finish.”

“Doctor Strange: MARVEL MADE A HORROR MOVIE! It’s weird, scary and earns the title ‘Multiverse of Madness.’ If you were at all concerned this movie wouldn’t feel Sam Raimi enough, fear not! I can’t imagine a more Sam Raimi MCU film. My genre loving heart is bursting right now.”

“Well, Doctor Strange is MASSIVE Marvel storytelling. Huge swings with enormous stakes. Raimi brings horror to the MCU, with dark twists and morbid turns. It’s full spectacle, and fully in line with the oddity of the STRANGE comics. Ambitious and breathtaking.”

“Doctor Strange in the Multiverse of Madness rules. It’s inventive, truly weird, and absolutely a joyride to watch. I didn’t realize how much the MCU needed something like this. I will have so many more thoughts over at ComicBook very, very soon.”

“By far the creepiest, gnarliest, zaniest, most haunting & terrifying Marvel movie, Multiverse Of Madness definitely brings the Sam Raimi horror vibes, and I loved that about it. Danny Elfman’s music is a perfect fit for the film’s odd, mysterious tone & Elizabeth Olsen is MVP, IMO. I most enjoyed how ambitious #DoctorStrange is. How it swings for the fences & how it’s lighter on humor & leans more into the evil of it all. That’s where Raimi really has some fun. Ultimately a film about being pulled toward darkness & the fight to keep it from engulfing us”

“Multiverse of Madness is the most unbelievable Marvel movie ever made. All gas, no breaks. With every scene more shocking than the last. Marvel Studios shows they are not afraid to push every limit imaginable. The Doctor Strange franchise is completely unleashed.”

“First thoughts on Doctor Strange in the Multiverse of Madness: I like that Marvel is hiring directors to make their kind of movie — and where it didn’t work out great with Chloe Zhao in “Eternals,” it works beautifully with Sam Raimi here. Good mix of Marvel and horror.”

“Doctor Strange throws a lot at the wall: some sticks (surprisingly simple narrative), some falls flat (mostly w/ CGI). Olsen crushes but Gomez is my rockstar. Cumberbatch reeeally feels like the “anchor of the MCU” throughout. Not perfect, but a worthwhile experience.”

“Multiverse of Madness thoughts:This movie is action-packed with incredibly creative uses of magic throughout.Strange’s character arc throughout his past few movies is expanded upon expertly.Some really fantastic horror moments, loved the “light horror” direction.Sam Raimi’s style shines throughout, with some uses of the camera and editing I have never seen before.Surprisingly small and contained story, in a good way. This is not an “Avengers level” movie, it is a tight and well-paced story about Strange and Wanda.”

“Multiverse of Madness very much feels like a both a Sam Raimi movie and a day in the life of Doctor Strange It’s the MCU formula perfected IMO: despite the franchise/multiversal implications and reveals, the film is very much self-contained and focused on its own story and style.

Multiverse of Madness does an incredible job of understanding what makes Doctor Strange so cool and capitalizing on those powers and flaws, in terms of visuals, plotting, and thematics. Classic MCU elements mixed with throwback superhero sequel arcs and legit horror tropes.”

“Doctor Strange in the Multiverse of Madness is the weirdest, grossest Marvel movie yet. It’s wildly disjointed, partially on purpose, so it doesn’t always work but the horror, and especially Wanda, work incredibly well. Plus wow. What huge surprises.”

“Welp! Marvel fans finally got their horror movie. Doctor Strange in the Multiverse of Madness is a dark & wildly imaginative creation from the twisted and brilliant mind of Sam Raimi. Dug the hell out of it. Study up on your comic book knowledge…Superhero fans will lose their faces!”

“Marvel takes a BIG swing with Doctor Strange. Elizabeth Olsen absolutely delivers and Raimi has his stamp all over it, but there’s a disjointed and chaotic rush to it.” 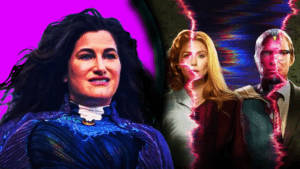 A NEW WandaVision actor has recently made a comeback for the Agatha spinoff series. 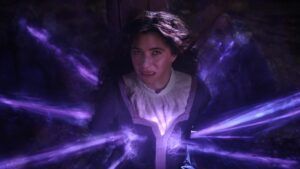