After the successful release of Loki season 1. And after getting a good response from the audience. Marvel Cinematic Universe is making Loki season 2.

Well I’m here to spoil the things that Marvel doesn’t want to reveal. So, let’s start with a big spoiler alert.

This time in the Loki season 2 we will see the scene from different timelines. Well the images that are leaked actually belong from the timeline 1976. In this timeline Loki comes for his ex-girlfriend Sylvie. Who left Loki and goes to another timeline and does a job in McDonald’s for living.

So you might wonder why Loki is running after his ex-girlfriend?

Well the answer is Loki is here, to ask her to help him to fix the broken timeline and stop the Kang. According to reports, fellow Kang variant Victor Timely will appear in Loki Season 2. 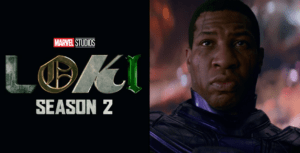 Tom Hiddleston’s Cute Behavior on the Season 2 Set, According to the Loki Actor