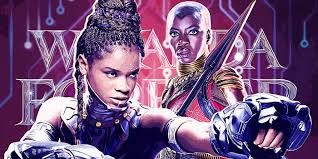 Along with last night’s TV spot for Black Panther: Wakanda Forever, Marvel Studios has released a batch of new character posters for the film, which is set to debut in theaters next month. The posters feature a half dozen characters, including Shuri — widely assumed to be the frontrunner to replace T’Challa as Black Panther — and Namor the Sub-Mariner, who serves as the film’s antagonist, and who was revealed to have ties to vibranium, the wondrous metal that has allowed Wakanda to have wealth and self-sufficience from the outside world for generations. To accompany the posters, Marvel rolled out a batch of Twitter emojis for each of the characters. As with this week’s DC release Black Adam, Namor is being characterized not as a villain, but as an antihero. That’s an important distinction to Huerta Tenoch, who plays the character, and who recently broke it down during an interview. “Latin-Americans are always the bad guys in Hollywood movies,” Tenoch told Empire magazine. “And now we are the heroes – or an anti-hero, in this instance.” He later added that “[Latin-Americans] are making something to be proud of in Hollywood.” While the identity of the next Black Panther has not yet been revealed, a recent trailer for Black Panther: Wakanda Forever has given fans their first look at the character in costume — and it’s definitely a woman. With a slimmer frame than you typically see with men in superhero roles, the new Black Panther has more gold highlights on her costume than T’Challa did, and a mask that incorporates a white dot design reminiscent of the paint Shuri (Letitia Wright) wore on her face during the battle scenes in Black Panther.  That isn’t to say this is for-sure the sister of T’Challa…but it certainly seems likely from context clues. In fact, immediately prior to the new Black Panther’s appearance, Ramonda (Angela Bassett) says “show them who we are,” accompanying a shot of a woman — almost certainly Shuri — standing in front of the Wakandan throne. The throne room is mostly submerged in water, and the parts that are not, are burning. Then…cut to the new Panther.

You can see the new posters below.

In Black Panther: Wakanda Forever, according to the official synopsis, Queen Ramonda, Shuri, M’Baku, Okoye, and the Dora Milaje fight to protect their nation from intervening world powers in the wake of King T’Challa’s death. As the Wakandans strive to embrace their next chapter, the heroes must band together with Nakia and Everett Ross to forge a new path for their beloved kingdom.0COMMENTS Black Panther director Ryan Coogler returns to direct Black Panther: Wakanda Forever, based on a screenplay he co-wrote with Joe Robert Cole. The film stars Letitia Wright as Shuri, Lupita Nyong’o as Nakia, Danai Gurira as Okoya, Winston Duke as M’Baku, Florence Kasumba as Ayo, Dominique Thorne as Riri Williams/Ironheart, Michaela Coel as Aneka, Tenoch Huerta as Namor, Martin Freeman as Everett Ross, and Angela Bassett as Ramonda.