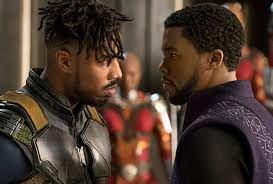 Despite Black Panther: Wakanda Forever being less than a month away, the highly-anticipated sequel still remains shrouded in mystery. So far, fans have gotten hints at what to expect, but have not been outright told all that much.  The biggest questions include who the next Black Panther will be, how franchise star Chadwick Boseman will be honored, and what sort of cameos audiences can expect in the film’s nearly three-hour runtime.  One name that has come up on the cameo front is comedian Trevor Noah. Noah appeared for a split second in the first film as a Wakandan AI named Griot, but it has been unknown if he will return for the sequel and if his involvement this time around will be expanded.

But Noah has been making the rounds with the expectation that he will leave his post on The Daily Show, and he’s been teasing something Marvel-related. After appearing briefly in Black Panther back in 2018, comedian Trevor Noah hinted that he may be back for the sequel in a recent interview on The Tonight Show with Jimmy Fallon.

After being asked by Fallon if he had told “every single human that [he] knew on this planet that [he was] in Black Panther“, Noah responded by saying that he hasn’t, noting that he “hate(s) spoilers:”

Fallon: “Did you just tell every single human that you knew on this planet that you are in Black Panther? And you’re like dude ‘I’m in the biggest movie ever’.”

Noah: “No, you know why? Because I hate spoilers. And so I wouldn’t spoil it even for my friends to let them know what I’m doing. I don’t watch trailers for instance. I hate trailer.”

Fallon: “Because you don’t want to know?”

Noah: “No, like. I like getting into the movie and not knowing what’s coming, what’s gonna happen, not anticipating a scene, not thinking about — Sometimes they’ll put — Have you noticed they’ll put a thing in the trailer that’s not in the movie? And sometimes you wait for the whole movie, and you’re like ‘where’s the thing?’”